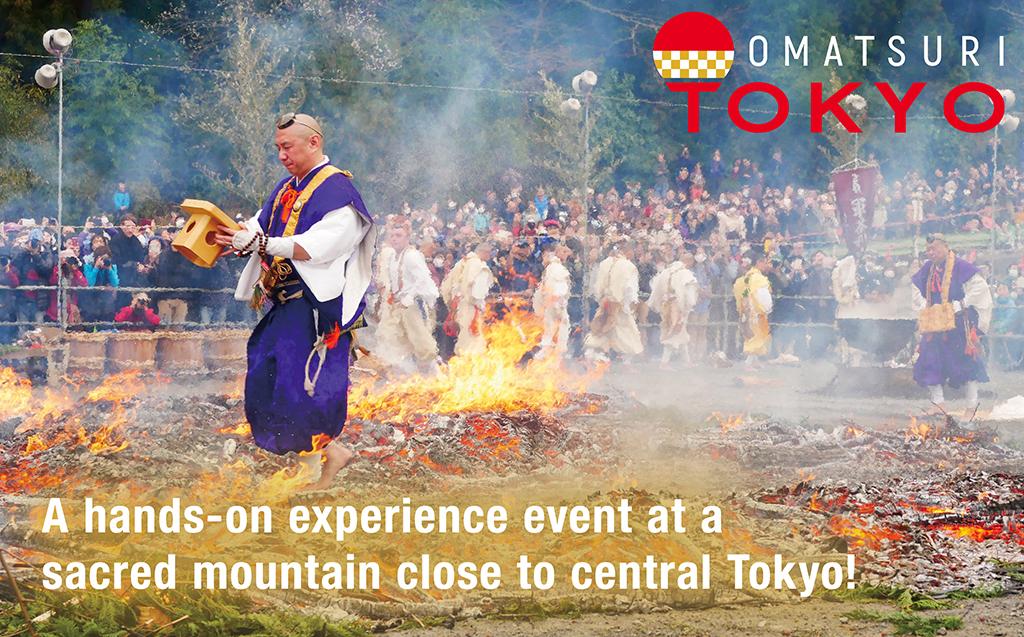 Takao-san Yakuo-in Temple is one of the three head temples of the Shingon-shū Chizan-ha Buddhist sect located in the Kanto region. Founded in 744, this ancient temple hosts a fire-walking festival in which participants walk through sacred flames and are purified by fire. The event is staged on Mt. Takao, which has been a site of mountain worship since ancient times, and it bustles every year with tourists from Japan and overseas. It is one of Tokyo’s major spring festivals.

Ascetic rituals involving fire-walking are held in all areas of Japan.
They are also held in Europe.

Mt. Takao is located in Hachioji, which is easily accessible from the center of Tokyo, and the summit can be easily reached by cable car. Because of this, it attracts large numbers of visitors throughout the year. Mt. Takao was originally known as a sacred mountain where Shinto and Buddhist concepts of asceticism were practiced, and traces of the ancient faith are still visible today. And, the event that provides a modern-day view of sacred Mt. Takao is the annual Fire-Walking Festival held at the Takao-san Yakuo-in Temple.

Fire-walking is an ascetic ritual incorporating Shinto and Buddhist concepts. Fire-walking is also a custom observed since ancient times by the Greek Orthodox church in Bulgaria and Greece. This ancient ritual involving fire is connected to the spirit of piety. The purpose of the fire-walking festival held on Mt. Takao is to allow the temple’s principal image, Izuna Daigongen, to purify participants with sacred flames. This symbolizes prayers for world peace, health and longevity, traffic safety, personal safety and warding off calamities. 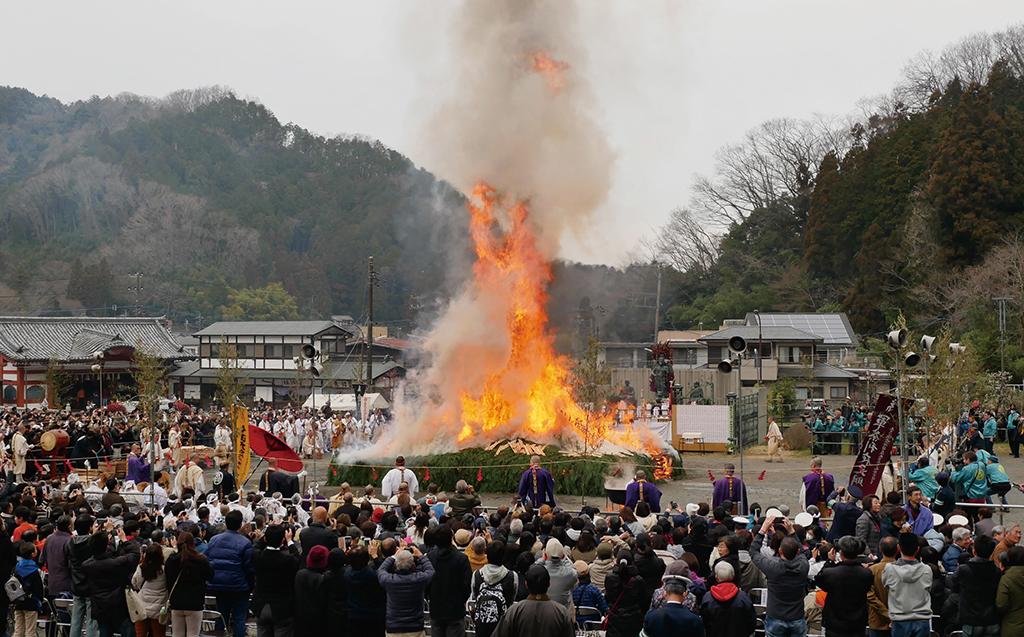 The fire-walking ritual involves ascetic mountain training that draws on Shinto and Buddhist concepts promulgated since the olden days. However, it also attracts large numbers of tourists keen to observe the ritualistic scenes of participants walking barefoot through flames. Known outside of Japan as the Mt. Takao Fire-Walking Festival, it is increasingly popular among overseas visitors who wish to acquire a deeper understanding of Japan.

The Fire-Walking Festival commences in the afternoon. The participants are called together by the sound of a conch shell being blown, and they then take part in various rituals, including Daidoshi Shotai (invitation to the priests), in which the priests who offer prayers and austerities are ushered to their seats, Hikiri Kaji (fire striking), in which participants are freed of their impurities by sparks from vajra implements, and Ganmon (Buddhist prayers), in which the prayers of followers are read aloud to the principal image. 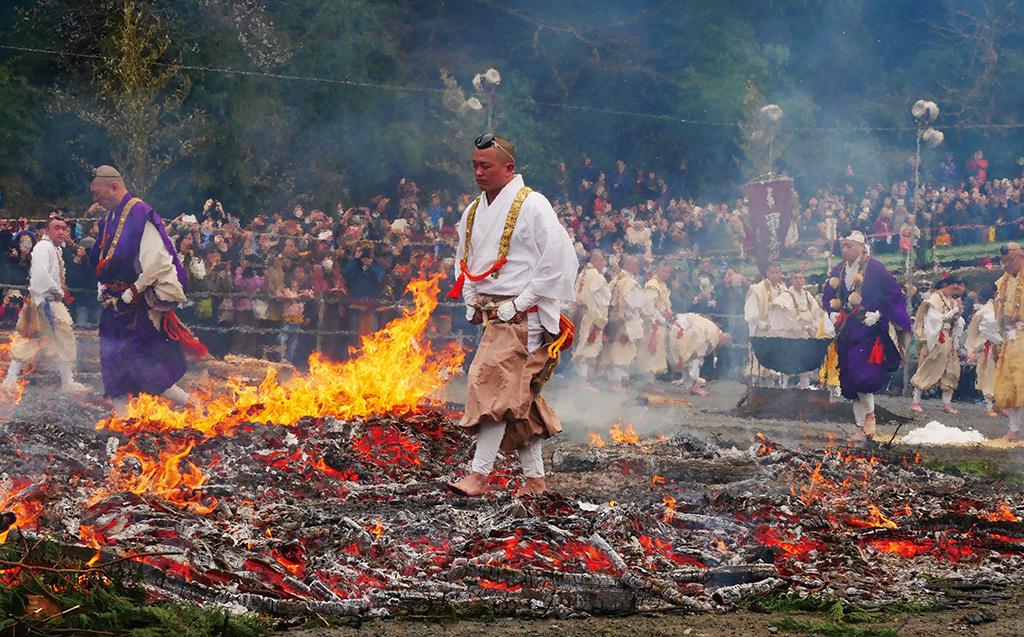 Following this, a mound of cypress leaves is set alight. The area is immediately enshrouded in rising smoke. The participants are then cleansed with boiling water in the Yukaji (water striking) ritual. And, after these rituals, the ascetic fire-walking ritual known as Kashosanmai is carried out. Observing this reminds the viewer that Mt. Takao has been a sacred mountain since ancient times.

After the Kashosanmai ritual, general participants are allowed to walk through the flames. Although they are required to do this barefoot, the level of heat is not sufficient to elicit cries of pain. They swiftly traverse the remaining embers while praying for their wishes to come true. Bontan good-luck charms, which ward off the outbreak of fire, and certificates proclaiming that the fire-walking ritual was successfully completed, are distributed (sold) to participants, and they are worth purchasing as a memento of one’s trip. In addition to observing the Mt. Takao Fire-Walking Festival from the outside as a tourist, visitors can also take part. This is sure to provide a festival experience that cannot be enjoyed elsewhere. 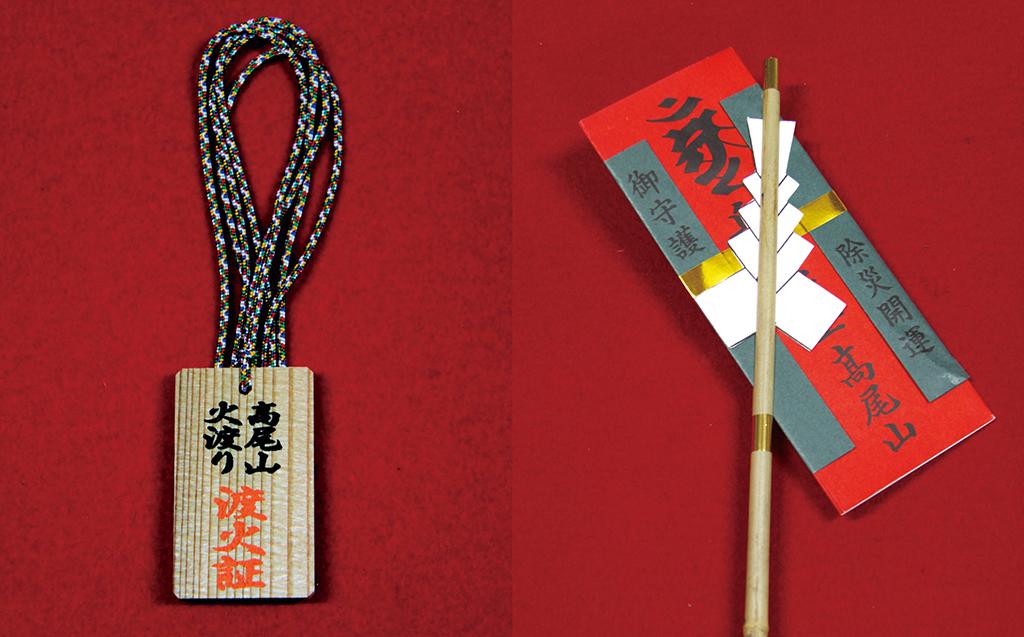 2nd Sunday of March every year

Text: Hajime Oishi
Photographs provided by: Takao-san Yakuo-in Temple
N.B. The information on this site is correct as of August 2019. It is subject to change without notice, so please confirm the details before coming to the festival.
(This is a "Tokyo Tokyo Old meets New" Project.)