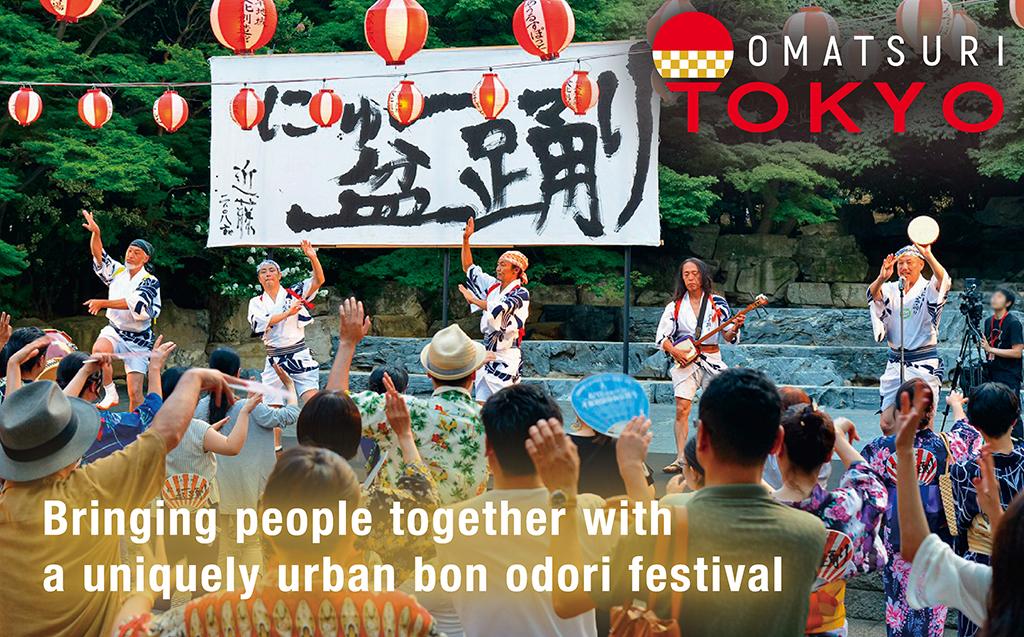 Set in the town of Ikebukuro, the popular “New Bon Odori” has been running since 2009. This bon odori with the dance company “Condors” involves the local community, and has become an integral and much-loved part of the Ikebukuro summer.

【Vol.11】Bringing people together with a uniquely urban bon odori festival

Song from “Kiyoken” commercial transformed into bon odori:
a festival with the “wow” factor

You will never forget the moment you first felt the pulsing energy of the New Bon Odori. The song repertoire is the first thing that surprises most people, because it contains relatively contemporary numbers such as Linda Yamamoto’s “Dounimo Tomaranai,” plus the song from commercials by the Yokohama shumai-dumpling restaurant Kiyoken, as well as traditional favorites like “New Bon Odori,” “Tokyo Ondo” and “Tanko Bushi.” But the true excitement of the festival is its energy level, without a dull movement to be had in the jam-packed venue. The crowd throws itself into the dance, cries ring out, and sweat flows. This being bustling, urban Ikebukuro, curious onlookers also get drawn into the ring of dancers.

At the center of the dance ring is Ryohei Kondo, the choreographer and dancer who leads the Condors contemporary dance company. The New Bon Odori is hosted by Owlspot (the Toshima City Performing Arts Center) and Toshima City Office, with the Condors and Owlspot as the festival producers. 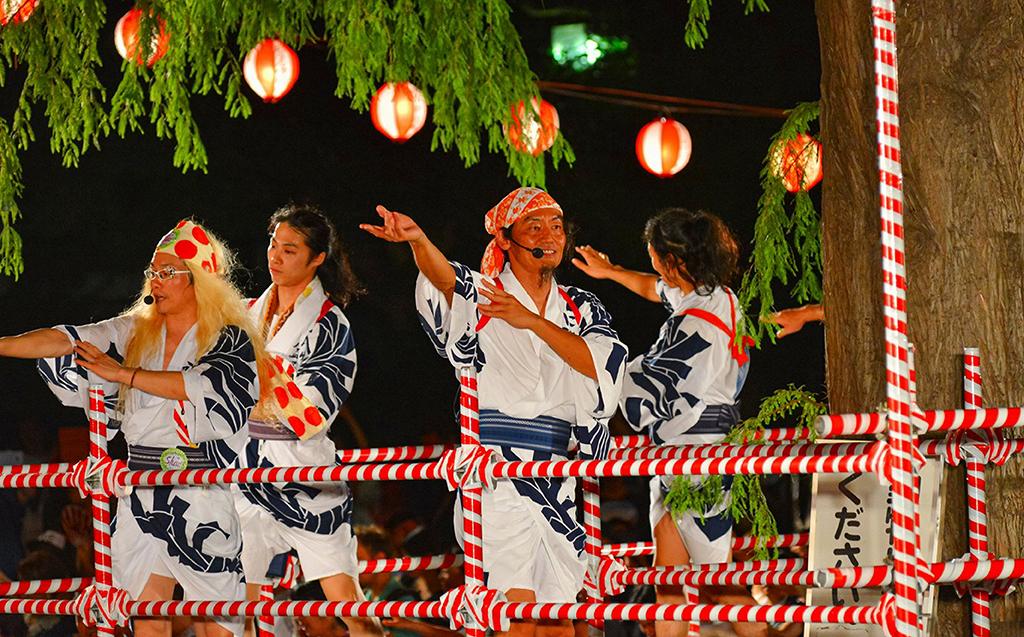 The New Bon Odori festival began in 2009. A workshop focusing on approaches to bon odori choreography held at Owlspot in the previous year led to an actual bon odori being held at Ikebukuro Nishiguchi Park. Similar examples of dance companies, such as the Strange Kinoko Dance Company (disbanded in April 2019), making a connection with bon odori festivals have been seen in recent years, and the New Bon Odori showcases this trend.

The New Bon Odori is popular partly for its fun dance steps. The dance incorporates elements of folk dance such as dancing in pairs, includes scenes such as “high five” hand claps, and emphasizes interaction between dancers. For those used to traditional bon odori dancing, all this might feel a little awkward at first, but New Bon Odori exudes a fun all of its own. Once settled into it, you’ll find yourself with a huge smile on your face. 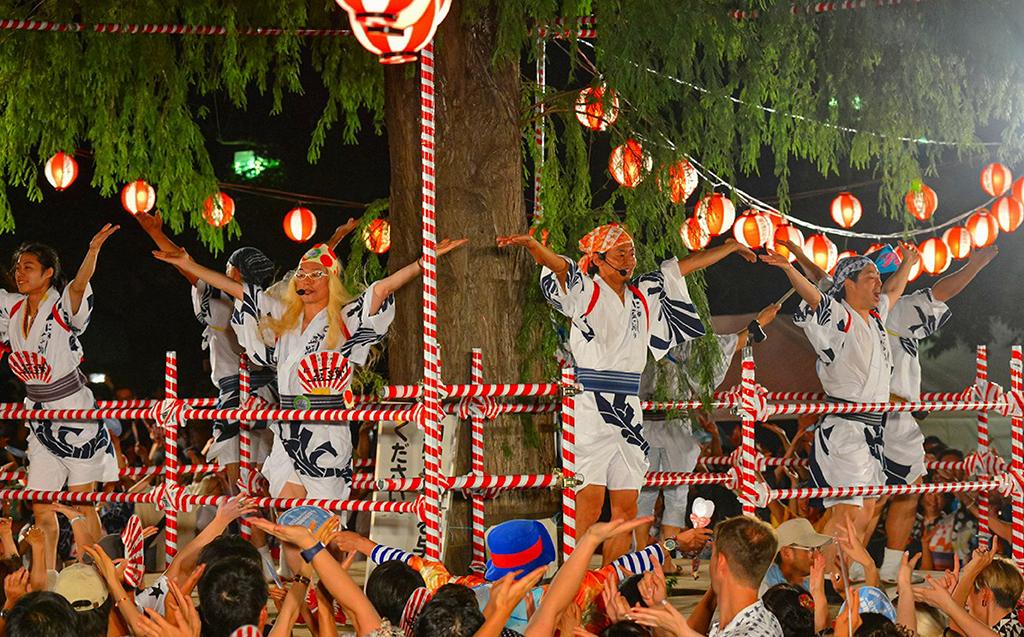 Plus, at this bon odori, a workshop is held before the actual performance, and members of the Condors teach the dance to participants in various venues throughout Toshima City. Called the “Sha Team,” (“sha” being an expression of enthusiasm in Japanese) they lead the ring of dancers. In bon odori festivals, local clubs often demonstrate and lead the bon odori dance from on top of a turret. That is what happens here, too; but in addition to this role, the team also seeks to bring people new to bon odori in, and have them join in the dancing.

In recent years, many localities in Japan have been trying to come up with new ideas for their bon odori. This is all part of the discussion about what can be done to keep local communities connected with each other from here on out. To this end, local residents are getting involved in the New Bon Odori. Creating the Sha Team was one initiative, and others are explored by way of workshops. The New Bon Odori’s appeal is in that it creates a new style while also making the most of the traditional bon odori styles and organizations developed by local communities. In this way, the New Bon Odori provides a vision of what future urban bon odori can look like. 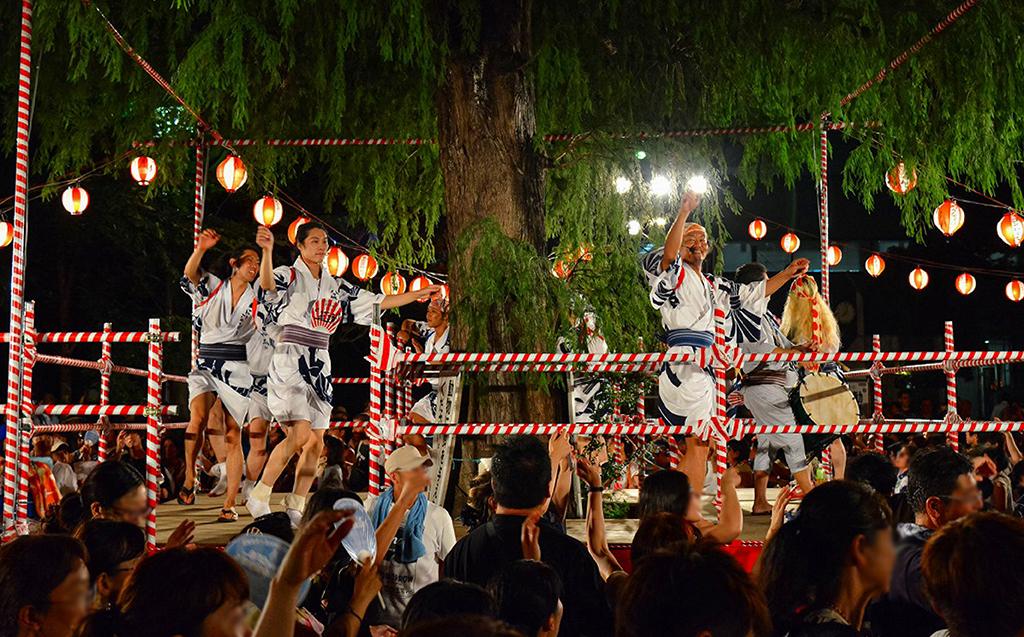 Text: Hajime Oishi Photographs: Tadashi Wakui
N.B. The information on this site is correct as of August 2019. It is subject to change without notice, so please confirm the details before coming to the festival.
(This is a "Tokyo Tokyo Old meets New" Project.)