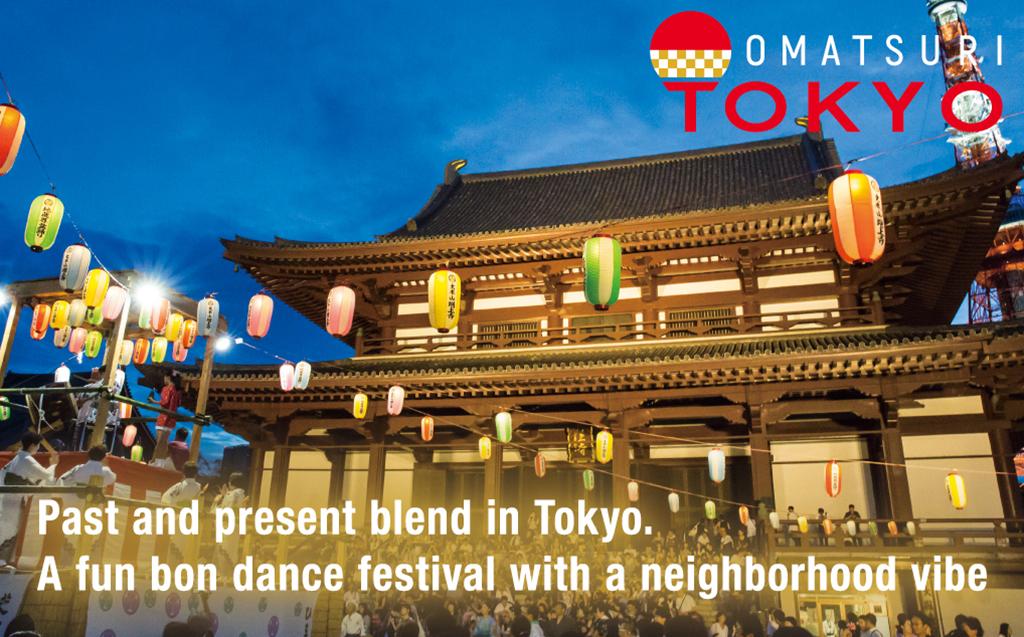 Tokyo Tower is a popular destination with tourists from around the world. And nearby is Zojoji Temple, which, since the old days has been the place to enjoy the dancing at its Jizoson Bon Dance Festival under Tokyo Tower’s winking lights. The festival’s roots are in praying that children grow up healthy, but its popularity has been further boosted in recent years, as here is the perfect spot for Instagram pictures.

【Vol.07】Past and present blend in Tokyo. A fun bon dance festival with a neighborhood vibe

The stage for the Jizoson Bon Dance Festival is an ancient Zojoji Temple, which has stood watch over Tokyo since ancient times.
Enjoy the Tokyo summer among the countless Jizo statues that stand sentinel here.

Tokyo Tower was completed in 1958, and has been a symbol of Tokyo from the years of rapid growth through to today. Although it has lost its main function as a radio tower to Tokyo Skytree (Oshiage, Sumida City), Tokyo Tower remains a prominent sightseeing spot, and is a popular backdrop for photos.

However, very few sightseers realize that a charming bon dance festival is held every summer just a few minutes’ walk away.

Zojoji Temple is one of the seven main Daihonzan temples of the Jodo sect of Buddhism. It is an ancient temple that contains many important cultural assets and treasures, and houses the Tokugawa family crypt, in which the remains of six of the fifteen Tokugawa Shoguns lie. In one area within the temple’s precinct stand 1,300 Sentaikosodate Jizo statues, in front of most of which are colorful pinwheels. Seeing the pinwheels turn with a clatter in the wind is a wonderful sight. The Jizoson Bon Dance Festival is an important annual event for Zojoji Temple, and has been held over the course of many years as a memorial service for these Jizo statues. 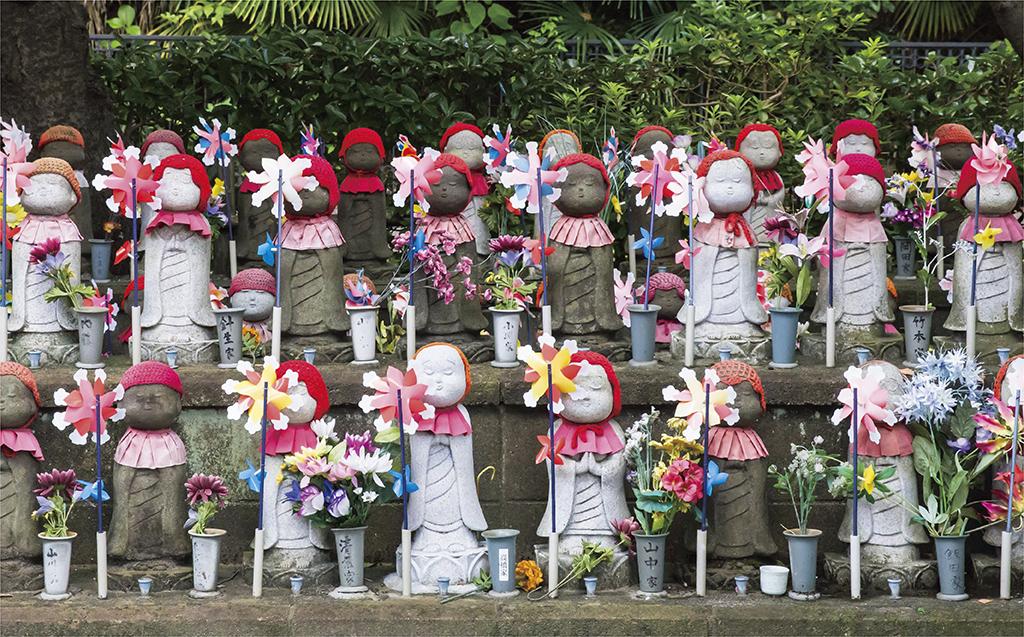 The most attractive part of this bon dance is its location at the foot of the sparkling Tokyo Tower. The sight of Tokyo Tower beyond the main hall of the imposing Zojoji Temple is a powerful one, no matter how many times you see it. As, of course, is the bon dance stage strung with lanterns. This panorama has been repeated unchanged through for decades, and it is a sight to be seen only during the Jizoson Bon Dance Festival.

Pinwheels, too, are closely associated with the festival.
The star players are the children, wearing yukata robes

Some of the festival stalls sell pinwheels, which are dedicated to the Sentaikosodate Jizo statues, for 0 each. Some dancers tuck the pinwheels into the obi sashes of their yukata robes, adding even more charm to the spectacle. 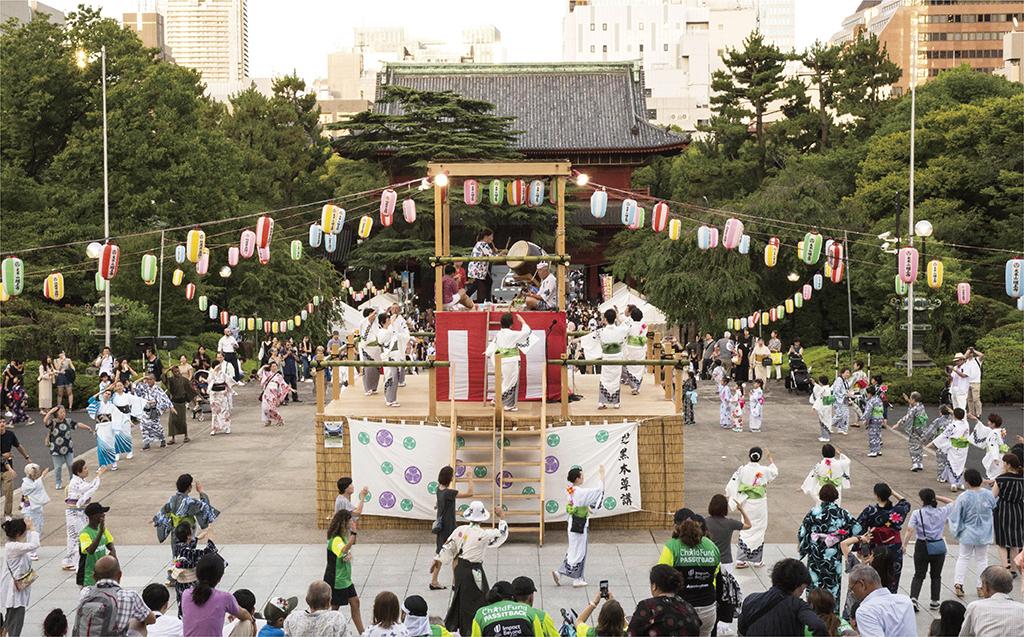 The songs played from the bon dance stage are mainly the standard ones popular in Tokyo bon dances, such as “Tokyo Ondo” and “Tanko Bushi.” But there are Zojoji Temple originals you can dance to here as well, like “Kazaguruma” and “Ojizo-san.” This is a bon dance festival with a very at-home atmosphere, and where everybody is free to join the circle around the stage and dance. Expect a warm welcome from the other dancers of various age groups.

The west-facing Bodhisattva, a goddess of mercy, is said to perform miracles when it comes to raising children and giving safe birth. She is enshrined in this temple, so is a reminder that the star players at the bon dance festival are children. There are many stalls providing bon dance festival games from way back, including ball-scooping from a water tank, target shooting and quoits, and the whole area is alive with children.

The Jizoson memorial service is held prior to the start of the bon dance on the first day. This is just one bon dance festival that can be experienced in Tokyo, where the past blends with the present. 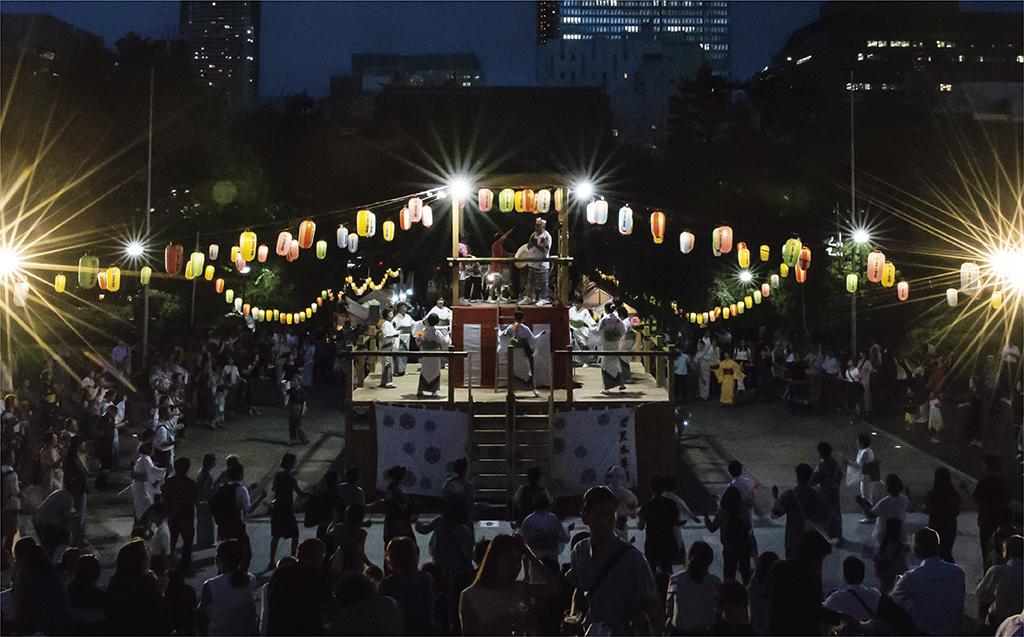 Annually at the end of July

Text: Hajime Oishi  Photographs: Keiko Oishi
N.B. The information on this site is correct as of August 2019. It is subject to change without notice, so please confirm the details before coming to the festival.
(This is a "Tokyo Tokyo Old meets New" Project.)